A lot of technology today seems to ignore the complexities of world time, timezones and daylight savings. In fact, as far as I know, there doesn’t even seem to exist a good watch that makes it easy to accurately know the time around the world.

The following picture is from Montevideo, Uruguay. It is 3 hours from GMT. And so is Nuuk (aka. Godthåb), Greenland. So while I am in Montevideo in South America I am sort of in the same time zone as Denmark - how about that? This time of year, though, most of Greenland observes DST, so local time in Nuuk is now GMT-2, not -3. 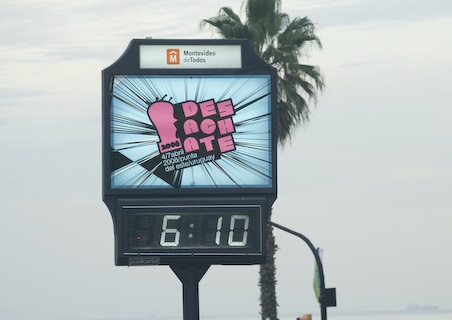 In Venezuala there is a certain mad man in charge that wants to create a new seperate time zone! The timezones don’t change that often, but recently there has been changes regarding DST. In USA the days when DST starts and stops was changed in 2007. DST starts and begins on different dates in different countries. Some countries within a certain timezone have DST and some don’t. A European I know asked a local person in a northern African country “Tomorrow at this time, what time is it?” The local person looked very puzzled after hearing the odd question. DST isn’t used in that particular country.

I don’t wear a watch regularly, but use my iPhone to get the time. When travelling to a different time zone, I can go to the time settings in the phone and select the city that I am in or a city that I think is in the same time zone. The iPhone will then use it’s internal clock and timezone information for the different cities to calculate the local time in the city in question.

Recently I was in Buenos Aires and, since it is a big city, of course I could find it in the settings on the iPhone. But… I came to find out that my clock was not showing the correct local time. I talked to an employee in the hotel about it and he said that Argentina in 2007 had readopted DST.

This change made by Argentina had not been reflected in my iPhone nor my MacBook Pro.

A lot of technology is developed in Europe or the US, where timezones don’t change that often. And some software developers seem to assume that it works the same way around the world. For instance there is JavaScript software that get a visitors local time from his browser and compare it to GMT to get the visitors GMT offset. That’s fine if you know that the user is in the US for instance. But in most of the Carribean DST isn’t used and in some parts of South America DST is reversed along with summer and winter.

Here’s the lesson for software developers: To accurately calculate a users time zone, knowing a GMT offset is not enough. Getting the closest (politically and geographically) city is best. Furthermore, time zones and DST policies change, so for a world clock to be up-to-date it should probably be updated with the newest time zone changes once a year or so.

2015 update: This was written in 2008. Since then I have learned more about timezones and changes to timezone rules. One of those things is that timezone updates happen often. 10 times a year is not that unusual. So updating “once a year or so” will not be often enough in many cases. Today I would recommend to apply every timezone update as soon as it is released.